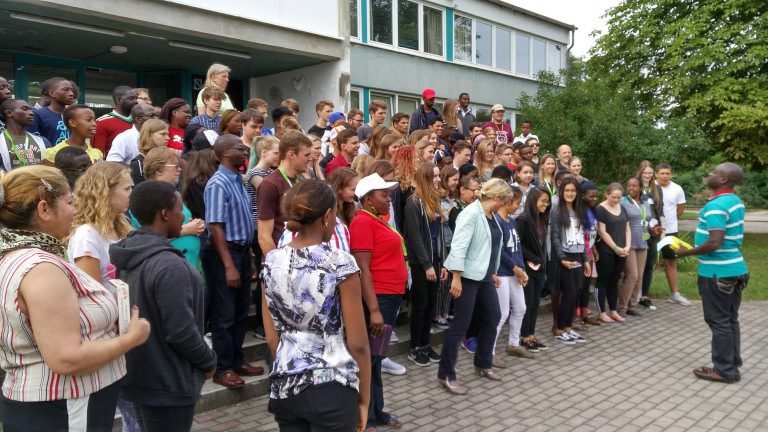 From June 21 to June 27 the International Schools Camp opened its doors for seven student groups from Germany and their tandem partners from Brazil, Cameroon, the Democratic Republic of Congo, Zambia, the Philippines and Rwanda.

Even though there were people from so many different cultural backgrounds and speaking different languages, everyone got along and understood and respected each other. And by this the participants said their farewells after almost one week not only with tears, but also happy about the wonderful time spent together.

We hope that the community that was built during the Schools Camp will live on and that maybe some lasting and cross-border friendships were established during our time in Wittenberg.

On June 19 the GPEN-Team finally got the keys to the former Karl-Marx-School in Wittenberg, which became our home for the next 10 days.

Day 01: Arrival of the students and teachers

Under the headline of special topics students as well as many of their teachers discussed about differences and similarities caused by our origin, our culture and the circumstances we live in.

According to the motto “Fair Play”, the ISC-participants were asked to form groups of 6 people and to give names to these teams.

The Sunday morning begun with an open-air service at the talents tent.

Day 06: Thesis for the future and farewell

Some visitors from the University of Bamberg guided the students through a workshop phase about 'Our contribution to a better Future'. Later, everybody met to prepare the last evening.

Far too quickly, we sat together for our last common breakfast.