The daily life at the pavilion was every day the same – and every day different at the same time!

Every morning we opened our gates, put up chairs and tables, switched on the screen of the world map. But also on every day there were different people who visited our tent. Part of the team’s daily work was the kiosk. Making waffle doe was one of the first daily tasks. Very fast the talents’tent had a very good reputation for the city’s best coffee and waffles!

Every visitor had the opportunity to learn interactively via a quiz which educational projects are part of GPENreformation. Guided through the whole area of the pavilion participants learned more about Education at Protestant Schools worldwide. Even if designed for children, a lot of times it was a lot trickier for our grown-up guests – clever kids!

The quiz also led the visitors to the global classroom. When not used, the stage transformed into a classroom including a board, tables and chairs. On the tables you could find posters with various stories, information, facts and figures about Protestant schools of the network GPENreformation. The board was also used for the “thesis of the week”. Chosen among the theses of “Protest for the future” activity, each week one thesis matching the week’s topic was chosen and written down publicly on the board for everyone to comment. 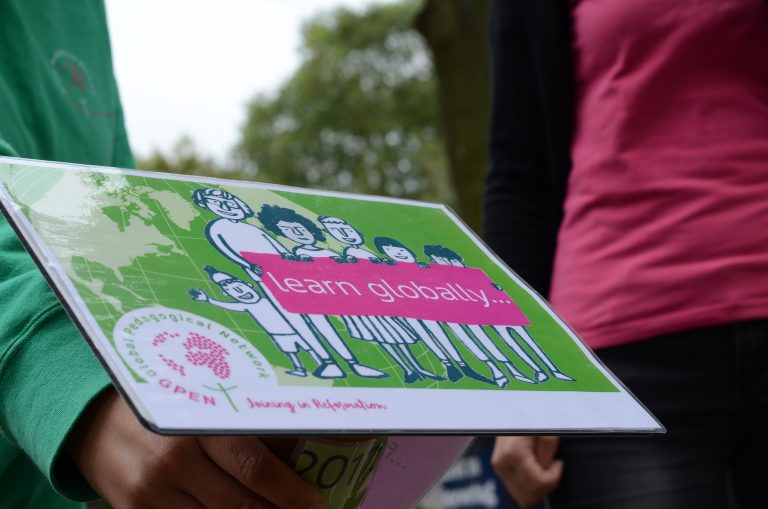 For the youngest guests the talents’tent had twice a week a special offer. The association “Church for children” prepared some nice little prayers and handicrafting activities for kindergarten kids. Sometimes members of the association visited Wittenberg, sometimes it was the talents’tent team itself who was in charge of the program. Anyways, it was always a lot of fun!

All this wouldn’t have been possible without our four volunteers who joined the office team during the summer. Meike and Astrid from Germany, Erna from Cameroon and Carrie from the United States made the difference: they talked to visitors about the network, offered child programs and made tirelessly coffee and waffle doe at our kiosk. Thank you so much!

a witness by Meike Rethmeier, volunteer